Daryl Mitchell and Tom Blundell once again combined to frustrate the England bowlers as they recorded their third-century stand in as many matches. 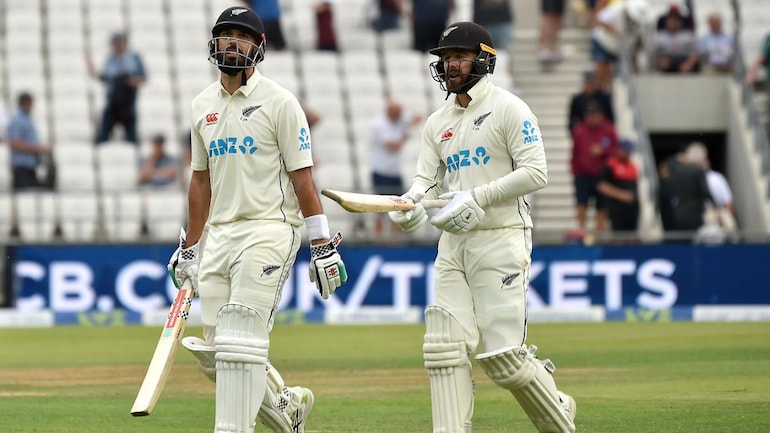 Tom Blundell and Daryl Mitchell seized the opportunity and rescued New Zealand from a tricky position with a solid 100-plus stand to thwart England on the opening day of the third Test at Headingley on Thursday. New Zealand were in a spot of bother when these two came out but their unbeaten partnership of 102 helped the nerves settle in the away dressing room. Mitchell (78*) and Blundell (45*) led the batting effort on Day 1 at Headingley.

Earlier, Henry Nicholls was dismissed in the most bizarre fashion off the final ball before tea to leave New Zealand struggling on 123/5. A straight drive by Nicholls struck the outstretched bat of partner Daryl Mitchell, looking to take evasive action at the non-striker’s end, and deflected toward mid-off where Alex Lees took the catch.

Spinner Jack Leach celebrated taking his second wicket of the day with a look of bewilderment on his face as Nicholls trudged off, out for 19 off 99 balls. Mitchell was 25 not out and will be joined in the middle by Tom Blundell after tea.

The other wicket to fall after lunch, from which the New Zealanders resumed at 65/3, was that of Devon Conway, who played on to the stumps for 26 to give Jamie Overton a first Test wicket on debut.

Nicholls had been given a life on 10 after being trapped in front of his stumps off a delivery from Matthew Potts. Not out was the on-field call by the umpire and England captain Ben Stokes chose not to review, only for replays to show the ball would have hit the middle and leg.

Mitchell has already hit two centuries and a fifty in this series and was looking to be a scourge for England again. His highlight was a six down the ground off Leach.

Trailing 2-0 in the three-match series, New Zealand won the toss and opted to bat under a blue sky in its bid for a consolation victory but lost Tom Latham for a duck on the sixth ball of the match, with Joe Root taking a catch off the impressive Stuart Broad at slip.