India are scheduled to play two matches in the Ireland series. Many players have put up their hands for the middle order spot and are in the reckoning for the T20 World Cup. 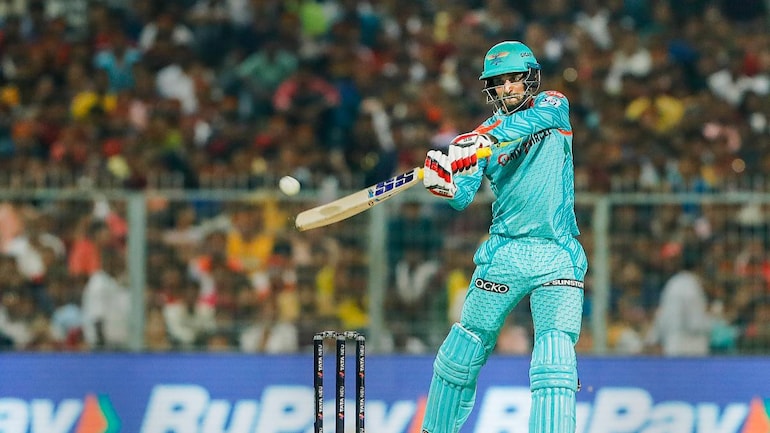 Deepak Hooda plays a shot in the IPL. (Courtesy: BCCI/PTI)

The Indian squad has traveled to Ireland for their two-match T20I series scheduled to start from 26 June. India have picked a fresh-looking squad for the series and are expected to hand out chances to players who have not been given a regular shot for the national side.

Lucknow Super Giants allrounder Deepak Hooda is one such player, and after a stellar Indian Premier League, he has stormed into the national side.

A middle-order batter with the ability to bowl, Hooda is one of the dying breeds of Indian batters who can sneak in a couple of overs if required by the team. He was primed to play in the South Africa series. However, an unchanged selection meant that he failed to find a place for himself in the series.

Former Indian cricketer Sanjay Manjrekar backed Hooda to play in the series and stated that he should be given a long rope.

“I am expecting him to get a look in this (Ireland) series because I thought we saw the best of Deepak Hooda in this last IPL. He has been around for a long time, and you have seen sporadic displays of his work and his ability. The last IPL, he came of age,” he said in a Sony Sports show.

“India need somebody like him down the order. It’s a very difficult job, and Hooda did a terrific job in the IPL. He is somebody that India will, I am sure, look at,” Manjrekar added.

The Lucknow player scored 451 runs from 15 matches at a strike rate of 136. He was one of the prime reasons behind Lucknow accelerating in the middle overs, after KL Rahul consistently slowed down once the powerplay overs were done.