Ranji Trophy Final: Sarfaraz Khan notched his fourth century this season after he smashed left-arm spinner Kumar Kartikeya for a four over the bowler’s head. 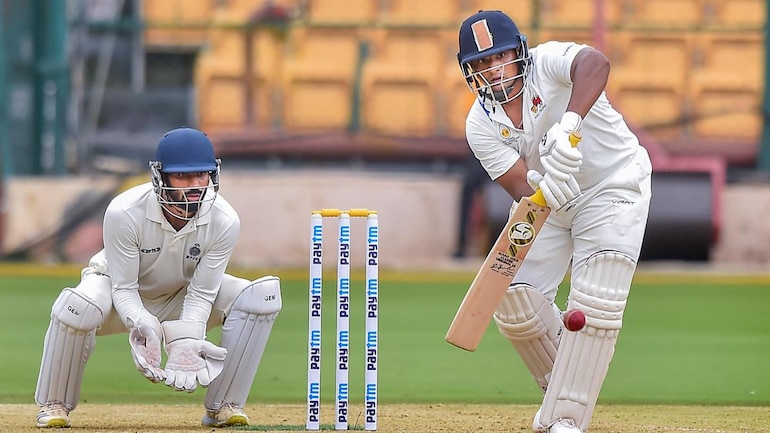 Sarfaraz Khan, on Thursday, June 23, notched his 4th century in the 2021-22 edition of the Ranji Trophy. The Young Turk has been in stupendous form this season and he carried it in the final against Madhya Pradesh at the M. Chinnaswamy Stadium in Bangalore.

He has arguably been the standout batter, not only for Mumbai and in the entire tournament. Sarfaraz got to the milestone off 190 balls on the second day of the ongoing game. He reached his century after he smashed left-arm spinner Kumar Kartikeya for a boundary over the bowler’s head.

At the close of play on Day 1, Sarfaraz was batting on 40 and he needed to carry on for Mumbai to get a decent first innings score. In the first session, he got to his fifty off 152 balls and showed a great amount of patience. From there on, he stepped on the gas and put pressure on the MP bowlers.

He was lucky after a fielder missed out on hitting the stumps at the non-striker’s end. He also had the rub of the green going his way after he edged one for four through the keeper and first slip. Sarfaraz also racked up over 900 runs this season and may well reach the 1000-mark.

With a batting average in excess of 150, Sarfaraz has shown his prowess with the bat in hand. At a stage when Mumbai were struggling to reach even 300, the right-hander has put his team in a fairly commanding position.

Prior to the Ranji knockouts, Sarfaraz played some impressive knocks for the Rishabh Pant-led Delhi Capitals (DC) in the 2022 Indian Premier League (IPL).