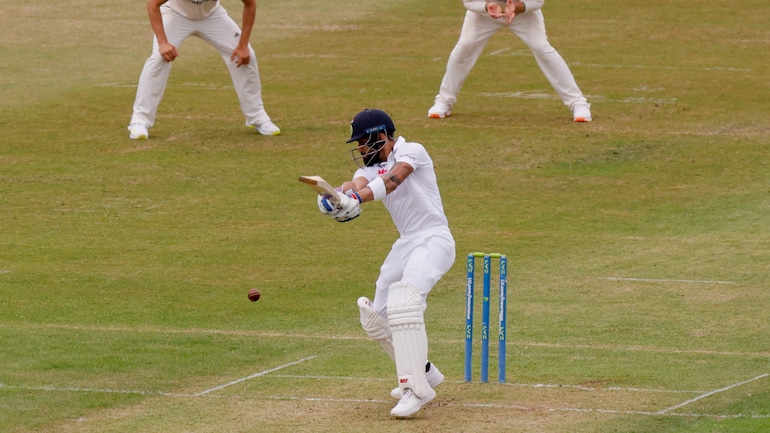 Former captain Virat Kohli stamped his authority with a fantastic six off Prasidh Krishna during India’s warm-up fixture against Leicester on Thursday. Kohli hit the last ball before the rain delay for a huge six-off Krishna to bring up the 50-plus stand with KS Bharat. Krishna bowled a loose delivery and Kohli lashed onto it, pulling it away for a six.

While India named their full roster in the playing XI, interestingly, four players from the Indian side were playing for Leicestershire. Among those who played for the Foxes was Prasidh Krishna, who was the only Indian bowler to pick a wicket in the opening session.

, What a shot from @imVkohli,

hits the last ball before the rain delay for a huge 6 off Krishna to bring up the 50 partnership.

We will restart in 5 minutes.

Kohli was dismissed for 33 after steadying India with a 57-run stand as Roman Walker dismissed the former India captain out LBW. The 21-year-old youngster then dismissed Shardul Thakur to complete a five-wicket-haul to reduce India to 148/7. Also, On Day 1, Kohli was seen trying to balance the bat upright without any support. It was reminiscent of what ex-England captain Joe Root had done during a recent Test match against New Zealand.

Earlier, India’s top order failed to fire as the top five batters were back with just 85 on the board. Rohit Sharma, Hanuma Vihari and Ravindra Jadeja fell to Walker. Shubman Gill got a start but departed for 21, while Shreyas Iyer endured a first-ball duck.

Virat, who struggled to score big scores in IPL 2022, is looking to make a fresh start and his fans will hope that the star batter ends his duck of not being able to score a hundred in international cricket in the upcoming series against England.